1967: The circumstances under which ELF fighters started to surrender to Ethiopia in groups

1967: The circumstances under which ELF fighters started to surrender to Ethiopia in groups 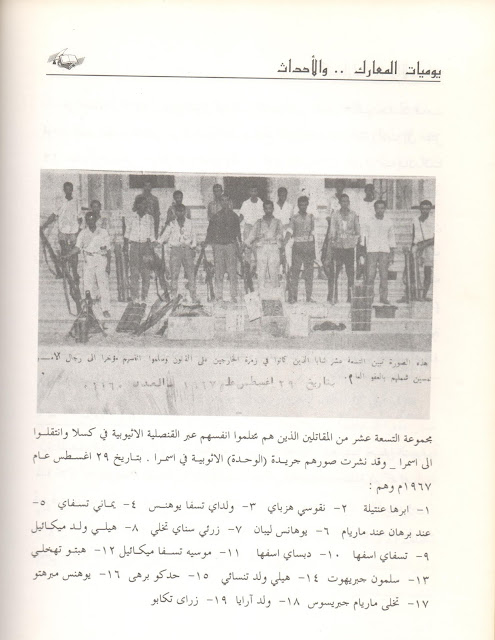 With the increased operations of the ELF and expanding those operations to the highlands, the Ethiopian Government took several measures to try to wipe out the ELF. In February 1967, the Ethiopian Government, under Asrate Kassa, employing the regular army and the Israeli trained Commandos, waged a scorched earth policy in the Lowlands and the Muslim villages in the highlands. More than 69 villages were burned and hundreds of civilians killed were killed and about 30,000 Eritreans took refuge in the Sudan. Large numbers of livestock were bombed, wells were poisoned.

In June 6 , 1967 (the start of the 6th Days Arab-Israeli war) Asrate Kassa issued an amnesty, to the ELF fighters which were referred to as Shifta, written in both Tigrinya and Arabic, and widely circulated to surrunder themselves and arms to the Ethiopian Government. The Amnesty was to last until 23 July the same year. Wide meetings were held in the highlands and people were encouraged to form militias against the ELF. The ELF was portrayed as Muslim and Arab. They also waged a diplomatic effort to isolate the ELF in Sudan. Asrate Kassa even formed a ‘peace Committee’ to negotiate with the rebels on their surrender. They even sent agents to the ELF who would later surrender with their weapons and were rewarded for that. During those trying times every fighter and every rifle was very important to the ELF. The main target of all those attempts were Christian highlanders.

That year the ELF was in a political and economic crisis, it had not enough arms. it was unable to defend the people. There was also a leadership crisis, there was no clear political program, the leadership was previously based outside Eritrea and were not able to manage the secondary contradictions that arose among various competing factions. Between those who wanted to reform the movement and those who wanted to maintain the status coup. The ELF then was predominantly lowland, thus the majority of whom were Muslims. Most of the contradictions was among them, thus it was never Muslim-Christian. It must have been more difficult for the few Christians highlanders who joined the ELF, under such circumstances.

Under those conditions, Isaias Afworki and his colleagues had formed a small cell in Asmara with the aim of joining the ELF as a clandestine organization and those in the leadership were Isaias, Haile Derue and Tesfai Gebre Sellasie. As we knew later, when Isaias split from the ELF in 1968, according to Tesfamichael Giorgo he had contacts with the Kagnew Station and Asrate Kassa who supplied the Isaias group with Arms. Testimonies given by Ethiopian General, Daniel Mengistu, who was Haile Sellasie’s foreign security chief, indicated in 2000 that Isaias was in the payroll of the Ethiopian Security services. Asrate Kassa’s son, who lives in London, recalled (personal communication) that Isaias and Hurui were among the visitors who came to see his father, Asrate Kassa, when he was in White Chapel Hospital , there. All those issues, may indicate that Isaias aim from the outset was to dismantle the ELF and how his close colleagues like Haile Derue, believed in him to the last.

Haile Durue narrated in detail in his conversations with Dan Connell, see the link below, how the group felt disappointed by the ELF and how he later recruited Musie Tesfamichael to the group. He also discussed how they decided to work clandestinely in the ELF, that they discouraged highlanders to join the ELF, until they establish their own organization. They also encouraged those who were in the ELF to leave it and pursue their studies, until further notice. Derue also stated that he was opposed to the leader of the 5th military region established in October 1966. He actually indicated he exploited the contradictions between the Revolutionary leadership in Kassala and the 5th Military Zone, to the advantage of their group. Derue also stated he was against all Christians being in one Zone (5th zone), but later they established ‘Selfi Nasent’ with Isaias whose members were solely Christian highlanders at the beginning. It was under those circumstances that some Christian highlanders started to surrender to Ethiopia in big groups.

In another development, the Arabic Ethiopian Weekly, ‘Al Alem’ published on November 8, 1967 that Woldai Kahsai (who was the leader of the 5th Military Zone of the ELF) and 19 of his follwers arrived from Khartoum by air. Directly upon their arrival, they met with Tesfayohannes Berhe , the Deputy of Asrate Kassa. The meeting was also attended by other Government officials: Ali Radaai, Hamid Ferej, Haregot Abbay, Gebre Yohannes Tesfamariam, General Teshome Ergetu, Zere Mariam Azazi and others.

In yet another development, 3 of the 2nd batch of the 21 military trainees in China, upon completion of the training in mid August 1968, refused to return to Eritrea and travelled to Damascus instead. Those were Germichael Woldegebriel, Tesfay Gebremariam and Berekhet Iyob. They letters to Osman Saleh Sabbe that they feared for their safety if they returned to Eritrea. But among the trainees were Mesfin Hagos Bidu, Arefaine Sebhat and Fesseha Abraha Fikak who returned to the field with the others.