A 1934 School Certificate of the late Dr. Yassin Aberra 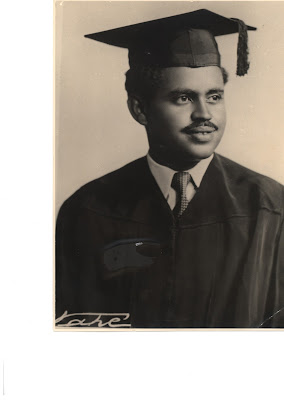 A 1934 School Certificate of the Late Dr. Yassin Aberra

Dr. Yassin Aberra was assasinated by the EPLF death squads at about 6 pm. in front of his house, on 31st January 1991 (26 years ago, this day), just 4 months before the liberation of Eritrea, a cause that he and his family had paid dearly to. I am sharing this certificate on the occassion of this sad day, with the kind permission of Jelal Yassin. 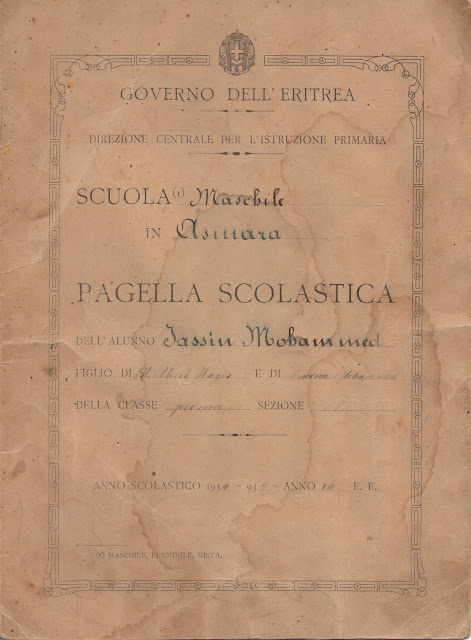 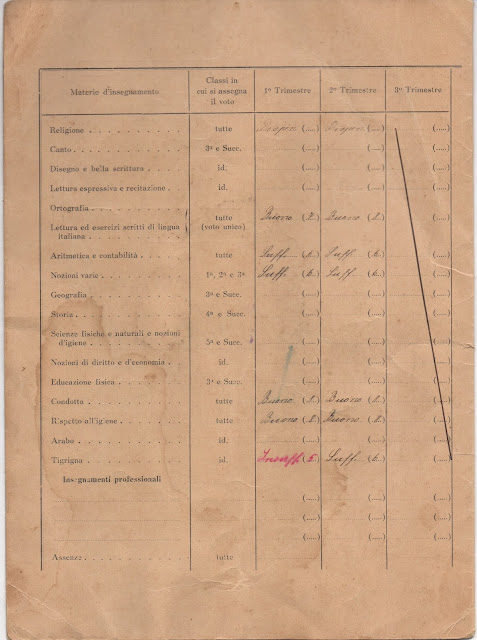 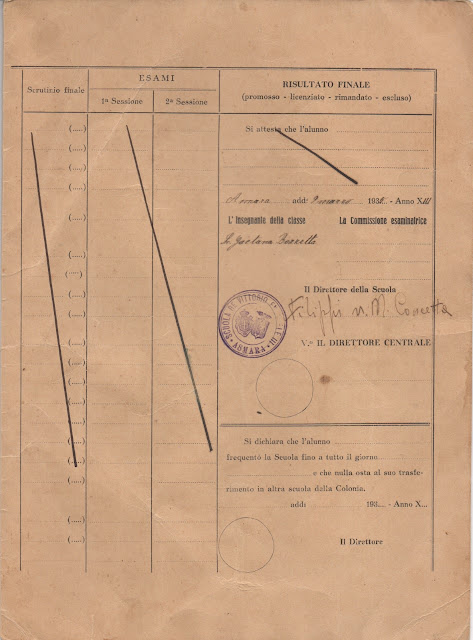 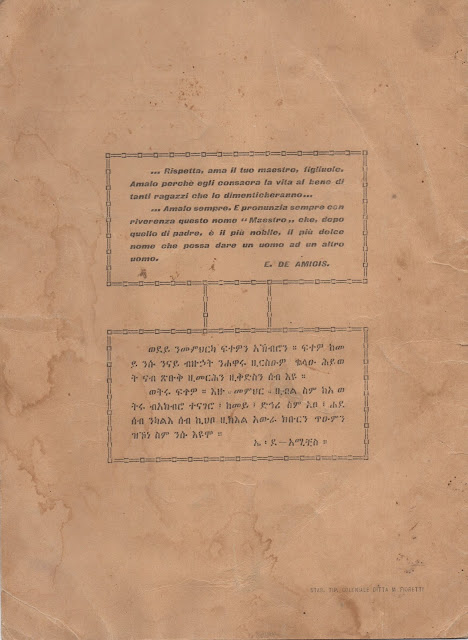 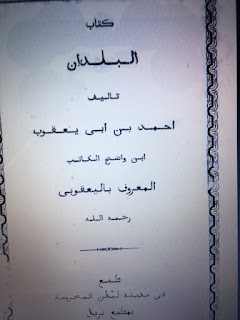 ص ١٢٥/١٢٤
اليعقوبي توفى ٢٨٤ هجرية
The description of the Beja land before 890 A.D. The history of the Beja is much, much older than the Axumite empire, it extends to more than 4000 BCE.

Kitab al-Buldan (Book of the Countries) - History, Geography of travels of the Arab historian (Ahmad ibn Abu Ya'qub ibn Ja'far ibn Wahb Ibn Wadih al-Ya'qubi (died 897/8 AD), contains a description of the India, Egypt and Maghreb and current parts of Sudan and Eritrea. In his book, he has written about the Beja.

This some of what he wrote on the Beja tribes:


The country of the Beja: From Alaalagi to the land of the Beja, who call themselves Alhaddarbah and Alkzbeyein is a distance of 25 leagues (means of measurement then). The city of the Beja Hidareb king is called ’Hager’. Muslims visit the city for trade. The Beja dwell in tents and use hides to lie on. They cut the breast of the boys so that their breasts do not look like those of women. The feed on sorghum and similar cereals, they ride camels and fight on camels and use them just others use horses, they use spears and they do not miss their targets.
The city where the king of the Beja known as Zanafja, lives is called Neglen. They are not Muslims, they worship an idol called Hajajewa

The kingdom of the Beja (mamlakat al-buja); They dwell between the Nile and the sea and are divided into several kingdoms, each governed by its own king.

The first kingdom of the Beja (al-buja) begins from the Aswān frontier. This is the last district of the Moslem territory stretching east and west from south to the frontier of Barakāt. They are a kind of Ḥabash called Naqīs, and their capital is called Hajar. They are subdivided into tribes and clans (buṭūn), as is customary among the Arabs; some of their tribes and clans [p. 72] are al-hadarāt [sic! obviously for al-ḥadāriba], Suhāb, al-'Amā’ir, Kūbir (Kūtir?), Manāsa, Ras'a, Arbari'a and az-Zanāfij. Gold mines, precious stones and emeralds are found in their country. They are at peace with the Moslems and the Moslems work in the mines of their country.

The second kingdom of the Beja is that of Baqlīn, which has many towns and is very large. Their religion is similar to that of the Magians (al-majūs) and the Dualists (ath-thunawiyya); they call the Almighty God by the name "az-zabhīr"<ref>A tentative Arabic script from the Ethiopian word Egziā’behēr (God). From this passage, one might guess that they were Christian (Conti Rossini, Storia d’Etiopia, p. 274.).</ref> and the devil by the name "sahāy harāqa". They pull out the hair of their chin and remove their central incisors.

The third kingdom is that of the Bāzīn, who border on the kingdom of the 'Alwa Nubians and the Baqlīn Beja, with whom they are, however, at war. The crop on which they live is ... [lacuna] ... which, together with milk, forms their staple food.

The fourth kingdom is called Jārīn. They have a dreadful king, whose rule extends from Bādi’<ref>Arabic: Bādi or Bāsaʾ (Tigre and Tigray: Batsa: Bade) is the old name of Massawa Island.</ref> on the Red Sea coast, to the frontier of Barakāt in the territory of the Baqlīn, until a place called Hall ad-dujāj. They, too, remove their upper and lower incisors lest - they say they resemble the teeth of asses; they also pull out the hair of their chins.

The fifth kingdom is that called Qat'a [Ibn Hawqal: "Qas'a"], the last of the Beja kingdoms. It is very large, extending from Bādi’ to a place called Faykūn.

[p. 73] They are a warlike, powerful nation who possesses a fighting clan (dār muqātila) known by the name of dār as-sawā, where their bravest young men are specially trained for war and combat.

The sixth kingdom is the kingdom of the Najāshī, which is a vast powerful country. Its royal town is Ku'bar [Aksum]. The Arabs go thither to trade. They have big towns and their sea coast is called Dahlak. All the kings of the Habasha country are subject to the Great King (al-malik al-a'zam) and are careful to obey him and pay tribute. The Najāshī professes the Jacobite Christian religion (dīn an-nāsraniyya al-ya’qūbiyya).

The last [i.e. 7th] kingdom of the Ḥabasha is that of the Zanj, a people who dwell near the Sind, as well as on other related nations, different from those Zanj who dwell on the borders of the Sind and the Kurak. They are people (qawm) who, Respite of their multitude (hisāb) are, however, of the same mind (ijtimā' qulūb). (ibid. I, pp. 191-193).

Or can be downloaded at:

The Geography of Strabo 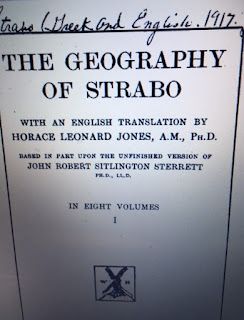 The Geography of Strabo, is one of the oldest written manuscripts about the geography and history of the world. Strabo (64 or 63 BC – c. 24 AD) was a Greek geographer, philospher and historian who lived in Asia Minor during the transitional period of the Roman Republic into the Roman Empire. It is not known precisely when Strabo's Geography was written, some place its first drafts around 7 BC, others around 17 or 18 AD. He travelled to Egypt and Kush , as far west as coastal Tuscany and as far south as Ethiopia in addition to his travels in Asia Minor and the time he spent in Rome. Travel throughout the Mediterranean and Near East, especially for scholarly purposes. It is through his book that we find the earliest accounts of our region.

This is an English translation from the original manuscript in Greek, V. I :

And this is a Greek and English version of the book:
https://ryanfb.github.io/loebolus-data/L049.pdf
Posted by Hedgait at 13:25 No comments:

Futuh Al Habasha or the Conquest of Abyssinia 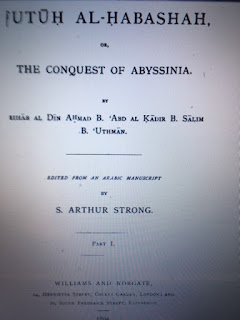 Futuh Al Habasha or the Conquest of Abyssinia by Shihab Al Din Ahmad, an edited preparatory in English, 1894

NARRATIVE OF THE PORTUGUESE EMBASSY TO ABYSSINIA 1520 - 1527


NARRATIVE OF THE PORTUGUESE EMBASSY TO ABYSSINIA DURING THE YEARS 1520-1527.  BY FATHER FRANCISCO ALVAREZ.


Toponomastics of Eritrea in the Light of Arabic Geographical Atlases Part I. Generalities, 2016 by BOGUSŁAW R. ZAGÓRSKI

Eritrea as a part of the Arab World is an unclear idea and it is of interest therefore to study its presentation as a cultural-geographical entity with its toponymic coverage by Arabic publications. The scarcity and difficult availability of the local cartographic products and other publications documenting the state-of-the-art of Arabic toponyms in the country, directs research towards external sources, in this case foreign school atlases in Arabic. This study surveys all Eritrean toponyms found in the collection of 48 such atlases and attempts at finding the rules of Arabicizing the names, the use of verbal roots and word structure patterns, both original Arabic ones as well as those spontaneously created for this occasional purpose, and underlines the low degree of standardization occurring in observed procedures.

THE PERIPLUS OF THE ERYTHREAN SEA 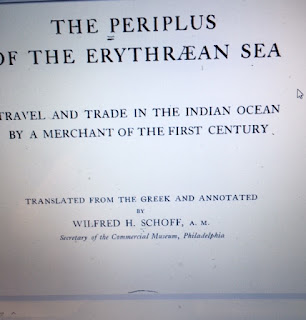 THE PERIPLUS OF THE ERYTHREAN SEA: TRAVEL AND TRADE IN THE INDIAN OCEAN BY A MERCHANT OF THE FIRST CENTURY TRANSLATED FROM THE GREEK AND ANNOTATED BY WILFRED H. SCHOFF, 1912


This, 342 pages book estimated to have been written about 60 A.D. plain and painstaking log of a Greek in Egypt, a Roman subject, who steered his vessel into the waters of the great ocean and brought back the first detailed record of the imports and exports of its markets, and of the conditions and alli- ances of its peoples. It is the only record for centuries that speaks with authority on this trade in its entirety, and the gloom which it briefly lighted was not lifted until the wider activities of Islam broke the time-honored custom of Arab secrecy in trading, and by grafting Arab discovery on Greek theory, laid the foundations of modern ge- ography. Not Strabo or Pliny or Ptolemy, however great the store of knowledge they gathered together, can equal in human interest this unknown merchant who wrote merely of the things he dealt in and the peoples he met—those peoples of whom our civilization still knows so little and to whom it owes so much; who brought to the restless West the surplus from the ordered and industrious East, and in so doing ruled the waters of the "Erythraean Sea."

"South Arabian inscriptions discovered by Glaser indicate the separation of Axum from its mother-land, the Habash or Ethiopia of South Arabia, not long before the date of the Periplus; and the fact that there is no mention of Axum in any work earlier than the Periplus, and not even in Pliny, suggests the same conclusion ; namely, that the Abyssinian Chronicles are unreliaable, at any rate in their earlier portions.

And a book review of the book:

The CIA Guide to Street Names in Eritrea

The CIA Guide to Street Names in Eritrea, a declassified document released recently by the CIA. The names of street in the major towns given in Arabic, Geez and Italian 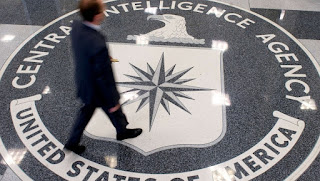