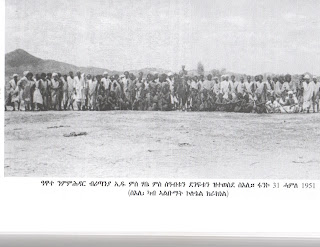 66 years ago, this day on 31 July 1951, Hamid Idris Awate, agreed to end his opposition to the British Military Administration (BMA) and return to civilian life. The British had regarded Awate as an outlaw and thus regarded him as Shifta. Awate agreed to return to normal life after long indirect and direct talks with the then  Commissioner of the Police of Eritrea, Colonel David P.P. Cracknell.

The Seen, the Unseen, the Invented Misrepresentations in the Making of a Colony. Eritrea


The Seen, the Unseen, the Invented Misrepresentations of African “Otherness” in the Making of a Colony. Eritrea, 1885-1896 by Silvana Palma

This essay analyses the photos of Eritreans taken by professional photographers at the beginning of Italian presence in Africa—particularly from the first Italian landing in Africa in 1885 up to the “reconquest” of Saati in 1881, after the Italian military defeat at Dogali—in order to identify their language and the extent to which they were functional to colonial rule. The photographic image is considered here as a primary element of a specific historical and cultural moment in view of the fact that it had a growing diffusion as a means of communication at the time of the “first Italian African war”, when it was already becoming a “mass” medium. The growth of the photographic market in the last twenty years of the 19th century coincided with Italy’s participation in the scramble for Africa and with the growth of the information industry, in which a very prominent role was played by the illustrated press2 which made use of photographs, particularly those taken by commercial photographers, as the preferential means of spreading Italian “knowledge” concerning Africa and its peoples.

Debtera Fesseha Giyorgis, from Yeha in Tigray, about his voyage to Italy in the summer of 1890


This is the translation of a travelogue written in Tigrinya by Debtera Fesseha Giyorgis, from Yeha in Tigray, about his voyage from Massawa to Italy in the summer of 1890. This is regarded as the first secular text published in the Tigrinya language. It was published in Rome in 1895.

According to the article, Dàbtàra Fesseha Giyorgis can be regarded as the father of Tigrinya literature. He authored at least five Tigrinya texts, of which two were published in Rome in 1895 and 1898. His manuscript “A History of Ethiopia” was published in Naples in 1897
_____________

Abstract: The core of Asmara, Italy’s former colonial capital in Eritrea, is widely known as a unique repository of 1930s Italian architecture. In addition, its Italian food and other traces of the colonial era lend it the semblance, to foreign eyes, of a still-colonial city. This article describes this apparent colonial inertia with respect to Eritrean citizens’ and government’s interests in sustaining the illusion, and argues that they use their past as Italian colonial subjects – specifically, their postcolonial cultural capital - to fortify their sense of separateness from Ethiopians, and celebrate their independence from their African neighbor.