The United Nations and the Independence of Eritrea


The United Nations and the Independence of Eritrea, a 286 page book, published by the UN in 1996

"The military conflict between Ethiopia and Eritrea was one of Africa's longest struggles for independence and one of the world's most protracted campaigns for self-determination since the founding of the United Nations."

"On 27 April 1993, the Referendum Commission announced the official provisional results. Of those who had cast their votes, 1,098,015 had voted "yes" and 1,825 had voted "no"; 323 votes were invalid and 53,838 were tendered ballots, cast at a polling-station at which the voter was not registered. This meant that 99.805 per cent of those participating in the referendum had voted for independence, and only 0.17 per cent had voted against. Eritreans voting in Ethiopia, the Sudan and other countries, as well as members of the EPLA, had voted "yes", again with nearly total unanimity. "

Thanks to Habesah AGreat for sharing
Posted by Hedgait at 02:22 No comments:

Highlights from the report of the UN Commission to Eritrea 1950


Highlights from the report of the UN Commission to Eritrea 1950

Resolution 289 (a) (IV) consisting of three parts, each dealing with one of the ex-Italian colonies. Section (C), relating to Eritrea, was adopted by the plenary session of the general assembly on 21 November 1949, which established the United Nations Commission for Eritrea to ascertain more fully the wishes of the inhabitants of Eritrea and the means of promoting their future welfare.
The five-power-commission consisting of representatives from Norway, the Union of South Africa, Burma, Pakistan and Guatemala was established to ascertain the wishes of the Eritrean people and to solicit the views of interested governments. The commission established its head- quarters in Asmara, the capital city of Eritrea, and held some seventy public and private meetings between 15 February and the end of April 1950. 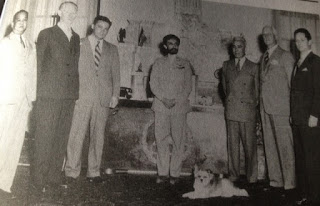 Members of the commission with Haile Sellasie and the British Ambassador


During the same period, it visited various parts of Eritrea and travelled to the capitals of Ethiopia, Egypt and, Italy to consult with these governments. At the end of April, the commission retired to Geneva to prepare its report and recommendation for submission to the interim committee for its meeting on 15 June.

The commission members were too pressed for time to prepare a joint proposal and, instead, they agreed, on 8 June, to submit some selected  documents along with their individual recommendations. The Norwegian member (Erling Qvale) proposed that Eritrea be united with Ethiopia; the South African (F.H. Theron) and Burmese (Aung Khine) that Eritrea be federated with Ethiopia; and the Pakistani (Mia Ziaud-Din) and Guatemalan (Carlos Garcia Bauer) commissioners that Eritrea be an independent state. The reports of the commission was presented to the Secretary General (Trygve Lie)of the UN on June 9, 1950.
This report is in French, but easier to read the tables about the population breakdown by language and religion, the names of the members of the political parties they met and other relevant info.

The Future of Ethiopia: Developmental State or Political Marketplace?

The Future of Ethiopia: Developmental State or Political Marketplace? by Alex de Waal

" In my case, one prism through which I interpret Ethiopian developments is the analysis derived from numerous discussions that I had with Meles Zenawi between 1988 and 2012. I initially developed the framework of the ‘political marketplace’ as a critique of Meles’s theory of the ‘democratic developmental state’. In particular, I saw monetized or marketized politics as a threat to the stateled developmental order that Meles envisioned: I argued that as well as the two scenarios he envisaged, namely economic transformation versus a relapse into poverty and chaos, there was a third: a political marketplace. The rationale for this paper is that these two frameworks, the developmental state and the political marketplace, offer analytical insights that are important for understanding Ethiopia today.

This paper has two parts. The first is based on those conversations with Meles. I have notes from many of them (especially from the period 2007- 2012) and recollections of others. I have organized them into the themes of the developmental state, democracy and nationalism, and foreign policy and security strategy. In each case what I present are amalgams of notes, verbatim transcripts, and a few inferences. They are rearranged for coherence. "