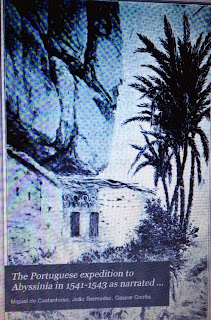 The Portuguese Expedition to Abyssinia in 1541 - 1543 as narrated by Miguel de Castanhoso, Joao Bermudez, Gasper Correa
-------

The contemporary narratives of the Portuguese Expedition into Abyssinia, commanded by D. ChristovSo da Gama, fourth son of D. Vasco da Gama, which have been brought together
here, consist of the books of Castanhoso and Bermudez, some letters to and from the King of Abyssinia, and some extracts from the contemporary chronicler Correa. These have been as far as possibleillustrated from the sources above mentioned, as well as from the works of travellers in
the country. According to the editor, the Portuguese Expedition was decisive in that Abyssinia has since remained Christian. This is the account of how a 400 Portuguese army, under D. ChristovSo da Gama; defeated Ahmed Gran.

As a personal note, Ahmed Gran was the military leader of the Afar Sultanate of Adal who had for the first time in Ethiopian history had united most parts of what is modern Ethiopia today (1528 – 1543), under his rule. The bulk of his army were Afar, not Somalis as described in the book. Western scholars and Ethiopian Christian scholars have always presented Abyssinian Muslims as invaders (as if they came from a distant planet like Mars), not as citizens and Ethiopia as Christian. Islam has been deep rooted in Ethiopia just as Christianity is.

You can download a PDF version of the book here: