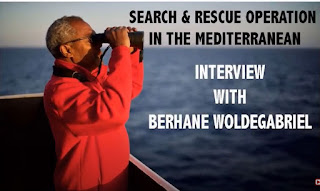 I knew Berhane for almost the last 50 years, and we have been very close since then. We regarded ourselves more as brothers than friends. I knew his family as he knew mine. We knew the details of those we were not lucky enough to meet. If there was a Muslim holiday, I was the first to wish him a nice one and vice versa.

The first time I knew him was when he was assigned as a national service student from Addis Ababa University in Agordat. I think it was his choice to come to Agordat. I was a 1st-year student, and he was a 3rd-year student. He used to have contacts with the ELF when he was there. I moved to Sudan in 1975 as a student of the University of Khartoum, and he followed suit a couple of years later, and our relations consolidated. I joined the Sudan Commissioner for Refugees (COR) in 1982, and he joined COR a few years later. We were based in Showak, and we were the only refugees who were department heads in COR. I was head of the Veterinary and Animal Production Department, and he was the Head of a newly established department of Communications. He later moved to Khartoum and worked for Sudan Now, the oldest English speaking magazine in Sudan. He wrote many interesting articles, some of which were investigative, for the magazine and was a famous journalist there. We worked for the cause of Eritrean refugees in Sudan.

In Khartoum, Berhane was a member of the EPLF, to begin with. In one of the meetings, a cadre stated that EPLF had ideological differences with the ELF. Berhane challenged the cadre that there were none. The cadre angrily told him, ‘Wuzaa’ which means, ‘get out, get lost.’ That was his last time with the EPLF; he never returned.

We had two big dreams that were not materialized, writing a children’s book with illustrations in local Eritrean languages and a non-political magazine that addressed social issues that face refugees. I hope somebody will fulfill that dream about the Children’s book. We were very close to fulfilling the latter. After many efforts, Berhane secured permission from the press and publications’ commission to publish the magazine. On June 29, 1989, we stayed late at night to review the first issue in his office and went to bed late. I woke up early in the morning, and when I opened the radio, there was just military march music, which was an indication of a coup. Later came the first proclamation of the Omer Al Bashir coup, which was to rule Sudan until last year. It was a sad day, and there was no way we could publish the magazine afterward.

A few months later, Berhane had to leave Sudan as the Islamist government was planning to arrest him. He got a tip from a friend and thus went suddenly to the UK where he stayed since then. I used to meet him whenever I visited London, and he once called me in Oslo. I very much enjoyed his company and the intellectual discussion we had. Every time I visited London, he would take me to his Sudanese friends who respected him very much. But his friends included different nationalities, Ethiopians, other Africans, Arabs, Jews, British and others, and all walks of life. London would be empty without him.

There is another story about the publishing of the magazine. A friend of his in the EPLF arranged for Berhane to meet Isaias Afwerki in the field. He was invited to see developments in the field. During his stay, he met Isaias, who proposed that the EPLF could fund the publication. Knowing that Berhane was a famous journalist in Sudan, the EPLF wanted to win him. Berhane did not accept the offer as he knew it would not be neutral if funded by the organization.

As a person, Berhane was kind, generous, caring, considerate, trustworthy, and accepting of others as they were. He was firm in his beliefs but non-confrontational. He worked hard to bring Eritreans of different ethnic, religious, and political backgrounds. His last project was to get all Eritrean political organizations together, a meeting that was supposed to take place in London in March this year. If he disagreed, he did so with respect. He had asked me to chair the meeting. The meeting did not materialize due to the Covid-19 pandemic.

Among other duties, he was a member of the Board of Trustees of the Eritrean Education and Publication Trust. He served as Tigrinya Teacher at SOAS, Language Centre, the University of London since September 2008. He was an experienced educator with broad experience in non-profit Organizations, Intercultural Communication, Policy Analysis, Translation, and Lecturing. He studied at the universities of Addis Ababa, Khartoum, and Leeds. He also worked for Search and Rescue Operations in the Mediterranean before its closure.

He will be deeply missed, but one lives with the pleasant memories I had with him in 5 decades. May his soul rest in peace—my condolences to his children, his brother and sisters, and all family and friends.

Video Assenna: Interview with Berhane Woldegabriel on Search & Rescue Operation in the Mediterranean in 2017

He wrote several articles for international journals, some of which are: