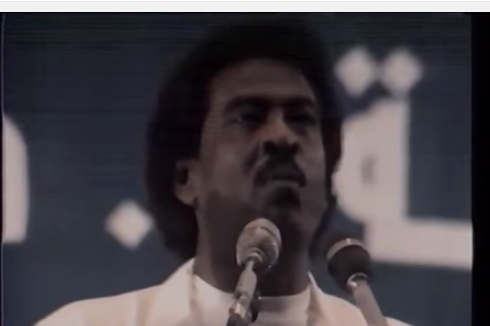 A great Eritrean artist whose life was shaped by a fateful night at Geza Berhanu in the late 1940s
It was during the rainy season around 1949, where it rained very heavily in Asmara, as if the the sky was wide open. A number of houses collapsed, among them was one in Geza Berhanu. A mother by the name Gimja (Kibra) and two of her children died in that accident. A boy of about 5 years old survived that incident, intact. The reason he survived was that his father who was going to the early morning prayers (Salat Al Subuh) to a mosque nearby, checked on his children who were sleeping with their mother and found the leg of one of them was hanging from the bed. He took his son and placed him on his bed on another room where he used to sleep. That boy was none but the one who was to be a great artist, Younis Ibrahim.

His uncle’s family took care of him afterwards. His father, Ibrahim Hassen Aman's family was one of the richest in Asmara. Both his father and his uncle died shortly after that incident and Younis ended up at Godaif Orphanage and later joined the Dekemare Mission School. There he met another orphan, the famous artist Negash Tekie. He learned to play the trumpet and started singing songs of other singers of the time such as Wed Sheriff, Shifa Saeed and Ibrahim Mahmoud.

He was later recruited by the police and ended up in the Police Orchestra. Girmai Wedi Filipo, recruited him to mobilize the people when Tedla Ogbit was planning a coup d’etat in 1963. Younis wrote and sang many songs. Most of his songs were revolutionary and full of meaning, perhaps a reflection of his sad life. Some verses of his early songs reads like this:

He sang with the Police Orchestra, Venus Band and Mahber Teater Merhaba, among others

In a Tigrinya article in the Sports Section of Hibret newspaper in 1968, the writer describes him as the most outstanding artists of his time. He further noted the Younis was concerned about the regional differences and the deteriorating situation of sports in the country.

Reflecting when Haile Sellasie crossed the Mereb River, he wrote:

On the war for liberation, he wrote and sang

During a Thursday in a religious festival in 1972, the Fedayeen fired shots in the air and then he sang:

And after the 1967 massacres committed by Ethiopia he wrote:

And on history he sang:

He joined the field together with Osman Abdulrahim and other artists on the 28th of December 1974 where he served there. Later he lived in Sudan and Saudi Arabia and Holland where he died there on the 24th of April 2007. He remained committed to the ELF.

He participated in one of the Bologna Festivals in the 1980s and sang this song there:

He introduced one of his songs after liberation by the following:

May his soul rest in peace.

--------------------------
Lots of thanks to Jelal Yassin Aberra who initiated the idea of honoring the late Younis Ibrahim and took time and energy to collect all relevant information and this article wouldn't have been possible without his support.