The splits in the Liberal Progressive Party and the Muslim League 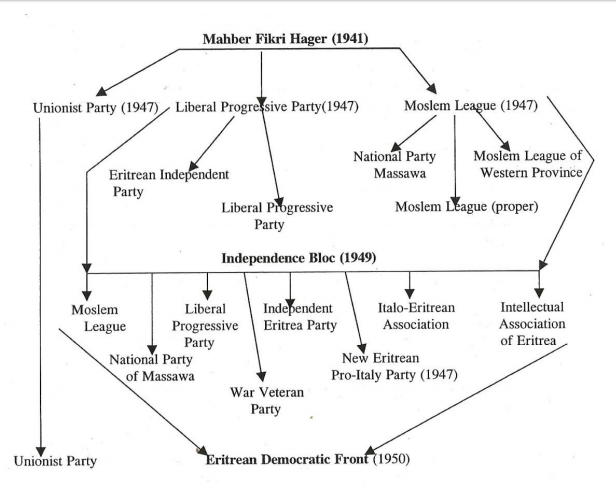 Source; Eritrea: The making of a Nation by Redie Bereketeab The Liberal Progressive Party (also known as Eritrea for Eritreans Party) chaired by Ras Asberom Tessema was formed in 1947 and its leaders, among others included Sium Maacho and Woldeab Woldemariam. It called for the unity of Eritrea and Tigray or what is known as Tigray-Tigrinya, to start with. Its base centred mainly in Eastern Akelle Guzai.  Ras Tessema was closely connected to the noble families of Tigray and was close to Ras Haile Sellasie Gugsa, a descendent of Emperor Yohannes, who had defected to Italy during the war with Ethiopia. After the Liberal Progressive Party (LPP) realized that the Tigray-Tigrinya unity was not feasible, later gave up this idea and called for Eritrea’s independence and was a close ally of the Muslim League (ML). Together with the ML, Pro-Italian Party and other small parties they formed the Independence Bloc in 1949. This Bloc was changed to the Democratic Front after the UN decided to federate Eritrea and Ethiopia in 1950. The LPP was against the Union with Ethiopia, opposed to the Shoan aristocracy and was regarded as close to the British. The previous title of Dejazmatch of Asberom Tessema was elevated to Ras by the British.

According to Trevaskis*, “after the death of the Tigriyan, Emperor Yohannes the Imperial Crown was passed to Menelik, a rival Shoan Abyssinian branch, and thus the Imperial seat was moved from Tigray to Shoa. It was natural then for the Tigriyans to be resentful and to seek to recover their imperial crown.  When the Italians were defeated in 1941 and when there rumours were rife that Tigray’s leaders were planning to secede from the Empire and set their own kingdom with Ras Seyum as its head, Haile Sellasie took the prudent precaution of holding him in Addis under careful surveillance. Therefore the Eritrean Unionists and Ethiopia saw Ras Tesemma’s moves with suspicion, believing it was a British attempt to exploit secessionist feelings in Tigray.”

It was under those circumstances and due to many factors that a Tigriyan insurgency, widely known as the Weyane revolt broke out in 1943, under the leadership of rebel leaders such Blatta Haile Mariam Redda. The insurgents took control of Aby Adi in Tembien in May and later routed out government forces at several places and captured towns such as Adigrat. In both Tigray and Eritrea, it was widely believed that the British supported the rebellion, though the rebellion was crushed after British military planes, based in Aden bombed the rebels, at the request of the Emperor. Those rumours played into the Unionists suspecting that the party of Ras Tessema was supported by the British.

The Independence Bloc (IB), had a solid support after the Four Powers Commission’s departure. But prior to the United Nations Commission’s arrival the Unionists intensified their terrorist campaigns on the supporters of the IB and the British failed to exert law and order. This terror, the Unionists propaganda about Italy’s role, together with personal rivalries took its toll and within few days United Nations Commission’s arrival the Bloc was disrupted and lost many of its members. The two main parties that formed it split.

The Unionists were also working to dissuade the LPP from working with the ML. In June 1947, Ras Seyoum was suddenly released from detention in Adiss and appointed as the Governor of Tigray as a gesture to the LPP. After a delegation of the LLP led by Dejazmatch Abraha Tessema visited Addis Ababa and met with Ethiopian officials, he formed the ‘Liberal Unionist Party’ which called for conditional union with Ethiopia. Woldeab Woldemariam left the LPP to join a new group, ‘Association of Eritrean intellectuals’. The Chairman, Ras Asberom Tessema remained committed to LPP principles. It to be recalled he and his family was subjected to hardship for opposing union with Ethiopia.

The Muslim League which was formed in 1946 split into three in 1950, including the parent organization. The reasons were among others the situation of the IB that was subjected to Unionist terror and propaganda, plus other reasons related to the formation of the organization. Ibrahim Sultan has led what was known as the “Serf-emancipation Movement” which undermined the role of the ‘Shumagulle’ over the serfs, as it has weakened the old traditional structure and led to the formation of many tribes and tribal leaders. The Unionists had promised the tribal chiefs that they will make then regain their power if the supported Union with Ethiopia. The Unionists although they exploited the Coptic Church to their full advantage sent petitions to the British Administration to dissolve the ML, on grounds that it was based on religious grounds. The two split groups were:

1.     Muslim League of the Western Province (MLWP):
This was the biggest faction and was led by Ali Mohamed Musa Radai (1913 -1974) who was in conflict with Ibrahim Sultan, some of which were personal rivalries and others were politically motivated as he accused Ibrahim Sultan played into the interests of Italy. It represented Barca, Senhit and Sahel provinces. It is believed that the British were behind Ali Radai. Despite all claims that the MLWP never supported the partition of Eritrea between the Sudan and Eritrea, it had never issued such a stand.  The Memorandum Submitted by the delegations  of Pakistan and Guatemala, stated that even those Muslim nationalists, who eventually made up the core of the MLWP “expressed their opposition to the annexation of the Western Province to the Sudan.”  It was also opposed to union with Ethiopia.  Trevaskis indicates MLWP was limited to Western Eritrea and claims that if it hadn’t been the conflict between the Beni Amer and Hadendewa, it may have supported the union of western province with Sudan. He states that it fell back on the somewhat absurd demand that western Eritrea acquire independence after a period of British Trusteeship.

The MLWP won 15 of 68 seats in the Parliamentary elections in 1952 (Unionists won 32 seats, the Democratic Front (a coalition of parties who wanted to safeguard the Federation Act: ML, LPP, Italo-Eritrean Party and other small parties) won 18 seats. The rest 3 seats were won by Independent Muslim League of Massawa, Nationalist Party, and an independent candidate, 1 each. The MLWP, even threatened the seat of Ibrahim Sultan. Though, the Democratic Bloc won a few seats in the western province, but its main seats came from the coastal area, Saho tribes, and the Jeberti.

As the result of the elections, Trevaskis* noted that MLWP hold the balance between the Unionists and the Democratic Front. Though both Democratic Front and MLWP shared many views but due to rivalry and bitterness with Ibrahim Sultan that they could not form a coalition. The Unionists took a moderate position which enabled them to form a parliamentary coalition with MLWP that enabled Ali Radai to be the Chairman of the Parliament and Tedla Bairu to be the Chief Executive. Ibrahim Sultan and his colleagues accused the MLWP of selling Muslim followers for positions in the Government. Other observers saw that the MLWP, seen that the Federation was unavoidable, decided to make the best of it. Trevakis* also noted that the constitution draft would have never been approved if either the Unionists or the Democratic Front had overall majority.

2.     The Independent Muslim League of Massawa (IMLM)
This group included merchants of Massawa and was led by Mohamed Omer Gadi and the split was due to differences with Ibrahim Sultan in 1949. This group was against the return of Italy in Eritrea and Ibrahim Sultan was accused of working with Italy. The group favoured British trusteeship to begin with. Later, its representatives met with Ethiopian officials who guaranteed them that Ethiopia will respect Islamic institutions and that schools will be taught in both Arabic and Amharic, the group accepted federation with Ethiopia. This won Omer Gadi, a membership in in the Federal Parliament and was assigned as Director of the Unionist newspaper, after the implementation of the Federal arrangement. But he realized soon that Ethiopia did not respect its pledges and was working to dismantle the Federation. He filed a case in the Supreme Court, requesting that the parliamentary elections of 1956 be regarded null and void.  He did not win the case and later travelled to Cairo and filed a complaint in 1957 that was sent to the UN against Ethiopia’s encroachment on the federation. Ethiopian officials in Cairo, convinced him that the Emperor was not aware of this and asked to go back to Eritrea. He was arrested upon arrival and was sentenced to 10 years imprisonment in 1958. He was released on 1969 and appointed as Mayor of Massawa. The Derg imprisoned him again from 1975 – 1977. He travelled to Saudi Arabia afterwards until his death.

Source: Eritrea: Colony in Transition 1941 – 52 by Trevaskis & other sources