14 December 1894 when Bahta Hagos rebelled against the Italian colonial army. 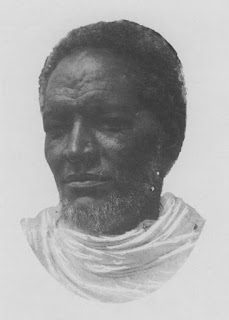 
Our destination was Segeneiti and Bahta Hagos met us half the way. Behind him was his brother and his son Geremedhin was also there. Bahta was in his mid forties. He was tall and thin. When you look at him you get the impression that he is cunning and crocked.  But his land that extends from here to Mereb, doesn't know any one who was more honest than him. He converted to Catholicism with his wife. His new faith bestowed on him a greater degree of  integrity. There is no chief in his caliber in the area. One word from him would put an end to any conflict. Every body respects him and submits to his rule because he is humble, generous and committed to his friends and us, the Italians. He shows less pride than the other Eritrean chief's because he is more intelligent than them. Lastly, Bahta Hagos is not a saint because he killed his brother.
He belongs to one of the old families in Akle Guzai. Ras Alula harassed and followed him and Bahta Hagos took refuge together with his brothers with the Habab. Because the Habab were pastoralists, Bahta and his men protected the tribes from other invaders. After Bahta and his group were allowed to return to their homeland, one of his brothers wanted to be a robber to earn his living. Bahta tried to persuade his brother to stop robbery and help the family establish their rule in their land. He told his brother that by doing so they will be able to win more friends and to show in front of God that they will regain liberty for their people. His brother refused to listen.  Later  Bahta resorted to threats.  He told his brother that he will either kill him or will he will surrender to Alula to kill him. His brother told Bahta, 'Go and surrender to Alula'. Bahta Hagos spent that night praying to God and at dawn went and killed his brother. But now he repents that and at times he suffers of nervous episodes. Unlike all the leaders that we met who treat their subjects with brutality, he resorts to asking for apology after any harsh measure, and treats his subjects like a father.


You cannot describe the Abyssinians through the character of Bahta Hagos. He was an exceptional character.
And this is what he wrote about him after he fought the Italians (March 1895):


What I wrote about him in 1891 was based on my own observations and based on the Italian officials who knew him closely. Ludwigi Marcatelli  from Asmara wrote in the Newspaper 'Tribuna' on 12 February 1895, "If there was any one who had doubts about Bahta Hagos, no person could have believed him. Yet, he rebelled against us. What he did was not a sudden thing or a revenge. He must have planned this over a long time to kill the whites who had stayed at Segeneiti and who respected him. We paid him a decent pension and we showered him with a lot of gifts, some of which were expensive. We bestowed on him the highest authority and  honours that was never given to any Abyssinian before him. Yet he died fighting us near Halai on the 18th of december.


It is said that the Frech Jesuits encouraged him to revolt against us. They were angered by our decision to drive them out of Eritrea. This may be possible , because Bahta loved them and converted to the Catholic faith on their hands. He had also contributed towards buliding a church in Akhrur. But I do not believe this was the only or the main important reason for his revolt. The day he decided to cut the negotiations with us and imprisoned Captain Sagouini and moved with his forces to Halai; He sent a message to the whole of Akleguzai. The messengers told the people, "We are going to liberate you from those who came from across the sea to take our land, and my move is coordinated with Ras Mengesha who is coming to support us with a force. I did not take a move until now because I was waiting for a response from a distant place.."

This is an important point, as I explained before,  the Italian families that came were given land in Seraye, near Akle Guzai in the area that was under Bahta Hagos and he did not like this. Other Italians were also given 25 hectares from Akle Guzai. He wrote three letters to Menelik, complaining about the confiscation of land and asking for his permission to attack the Italains. If Menelik did not agree, he asked him to raise the complaint to Italy. Menelik replied twice asking for patience and that he was waiting for a response from Italy. It is not known if Menelik gave the permission for the attack, but he sent 35 thousand rifles to Ras Mengesha.
------------
From Ferdinando Martini’s memories and impressions in his book, ‘Nell’Affrica Italiane’ 1890.
He was a member of the Italian Parliament who was sent to evaluate the viability of Eritrea, as a
colony. Pages 102 - 106 from the Arabic translated edition
------------------------------------

Bahta originally gained recognition in 1875 when he killed Embaye Araya son of Rasi Araya, an Ethiopian Governor, in a skirmish precipitated by raiding of the area. Bahta and other Eritrian tribal leaders were in constant conflict with the Ethiopian forces under Ras Alula and Yohannes (himself a Tigrian); for example, despite the best efforts of Ras Alula's lieutenant Balatta Gabru in 1880, Bahta evaded capture and later that year allied himself with the Egyptian garrison at Sanhit (latter Keren). In 1885, as an Italian colonial presence replaced the defeated Egyptians, and their control of Massawa, Bahta moved to ally himself with them and their General, later provincial governor Oreste Baratieri. As a consequence, Bahta came to control Akkele Guzay, and by 1889 his own forces formed an important flank in the Italian moves to create the Colony of Eritrea. He fought alongside the Italians against the Mahdists at the Battle of Agordat in December, 1893. However Bahta became increasingly frustrated with the conduct of the Italian Colonial Government and their soldiers, particularly the expropriation of land from the clergy.

In December 1894, Bahta unilaterally led his force of 1,600 men in direct revolt against the Italians, although he claimed support of Mengesha. He captured the Italian administrator at Segeneiti, which was then the capital of the province, and declared an independent Akkele Guzay. He proclaimed himself "An avenger of rights trampled on by the Italians" and also said "the Italians curse us, seize our land; I want to free you... let us drive the Italians out and be our own masters."On the 15th, the telegraph wires were cut from Segeneiti to Asmara, which the Italians had occupied since 1889, in order to give himself time to mobilize the population and bring Mengesha into the conflict. Baratieri immediately suspected Mengesha and ordered Major Toselli and his battalion to move on Segeneiti. Bahta was killed in the attack on the 18th of December.
------