Picture: ELF group that was training in China 1967 and Isaias's early views on ELF 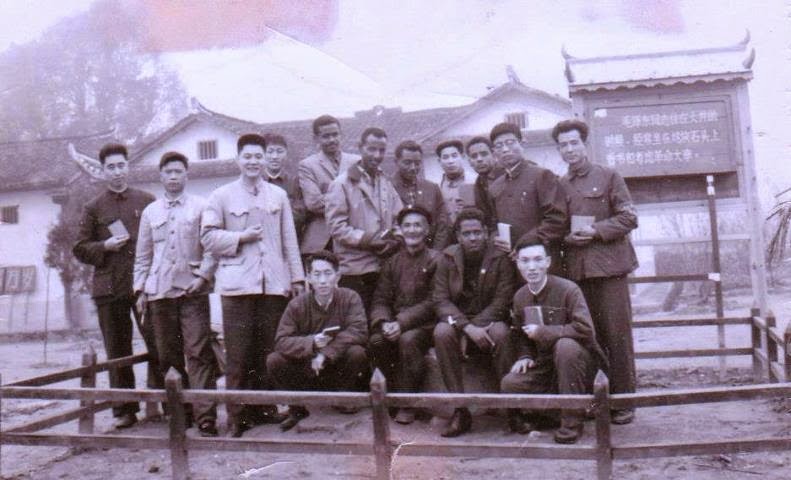 "Before I went to Sudan , the ELF was something like a magic organization to me -maybe some kind of fairy tale - but the first day I arrived, I became frustrated. People began telling me about the ugly nature of the ELF ans Kassala became a nightmare for me. For some reason we were ostracized, even accused of being agents for the Ethiopians. Very narrow considerations of clan, tribe and religion were the basis for surviving or not surviving. We were living in an atmosphere of terror, were we had to go in groups, especially at dusk, to look after each other. It was definitely an awkward position, after all those years of fighting for this organization."...

"The inside of the ELF was always boiling, but you would never talk about Eritrea, always about tribes or clans or religious affiliations. There were all sorts of leftist tendencies, at that time but the battle in the ELF was not one of ideas or ideals - it was a question whether there was nationalism or not. Revolutionary ideals had to be injected into the ELF to make it a genuine nationalist movement."

Connell tells us that Isaias still carries a tattooed letter, 'E' on his right shoulder as a symbol of his youthful exuberance from this period.
-----
I wonder why did then (if it was as he described it), the ELF sent him to train in China within one year of joining the organization and why was he was elected as a member of the General Command, in 1969.
---------

It was in China that the clandestine party was formed. According to Yemane T/Gergish in the link below, Isaias told the 2nd Congress of clandestine party of the EPLF (Eritrean Peoples Revolutionary Party) in 1987 that it was in China that the  Chinese told them they can not win the struggle without a communist Party and they even drafted the bylaws for them (Isaias said the bylaws were drafted in our language, Yemane thinks it was in Arabic) and all the students agreed to be members of the party. Isaias also told the participants that Osman Sabbe and Idris Glaudios came to visit them in China. The Chinese told them that the students have agreed to be members of a vanguard party and both of them also told the Chinese that they will be members, too. Isaias told them further that Sabbe was making fun of Galudios as he told the Eritrean students, look at this guy, he told the Chinese he will be a member of a communist party, yet he prays five times a day. He can not even wait until he leaves China. Sabbe also told them to give him the draft of the bylaws of the party as the students will return through Saudi Arabia and so the bylaws can be confiscated. So he kept the bylaws and told the students he will send it to them later to the field, but they never saw the bylaws again.
----
Listen to Yemane's interview starting at min 38;45 below: