Idris Mohamed Adem one of the prominent Eritrean politicians 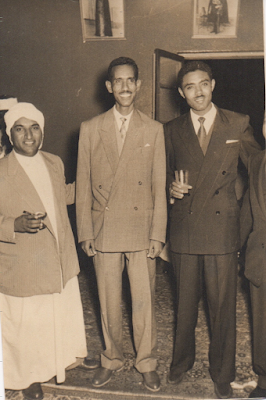 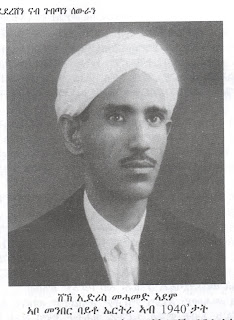 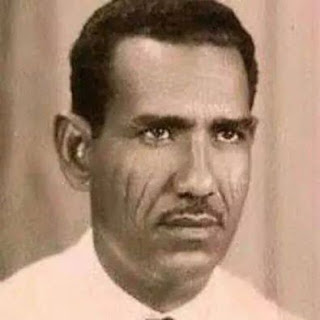 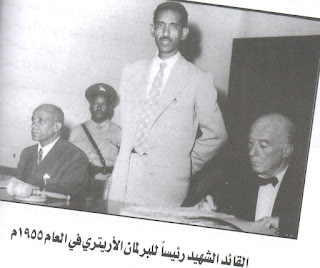 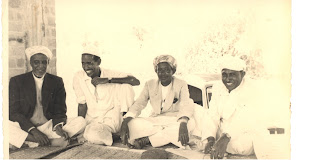 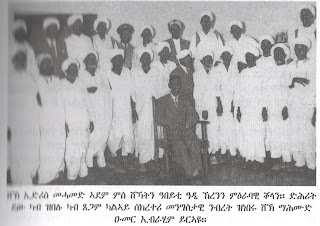 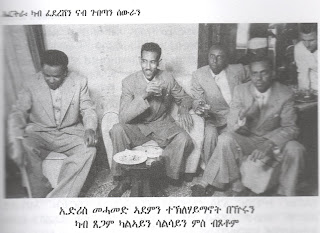 You may have heard much about Ibrahim Sultan and Wolde Ab Woldemariam, may be less about Abdulgadir Kebire and others, possibly not about this man. The prominent Eritrean politician whom the EPLF/PFDJ has erased from the history and whom they want us to forget because he was at odds with them. He was a Leading architect in the formation the ELF. President of the Eritrean Assembly (parliament), and prominent leader of the Eritrean Liberation Front, was born in Agordat in 1922. His father was a local farmer who moved to Sudan, and joined the Sudanese Army in Ghadaref – eastern province of Sudan -  where Idris Mohammad Adam enrolled in a local elementary school. In 1936 his family moved back to Agordat where Idris Mohammad Adam pursued his education in Arabic language, religion and the English language and, later worked at the local Sharia Court in Agordat. During the British Administration, in 1941, he served as official Secretary for the Beni-Amer Diglal (Chief). He wrote for the Arabic language edition of the Eritrean Weekly News. In 1947 he took part in the founding Conference of the Muslim League party , and led its Western Province branch.

In 1952 he was elected to the Eritrean Assembly, and in 1955 became its chairman, but his determined support for independence led to his removal in 1956 under pressure from the Ethiopian government. Haile Sellasie tried to persuade him to be party to the dissolution of the federation but he refused. After he was deposed as President of the Eritrean Parliament he was invited to come to Addis to become an advisor to the Emperor at the Palace but he refused that, too.  Afterwards, he lived in  Agordat, his home town. Back in Agordat, Idris Mohammad Adam continued his support for the cause of independence. He led the popular demonstrations in Agordat in protest to the decision of the pro-Ethiopian parliament in Asmara to replace the national flag of Eritrea by the Ethiopian flag on 24 December 1958. In an interview with Gunter Schroeder, Idris recalled that Hamid Idris Awate came to see him when he was the Chairman of the Eritrean Parliament complaining about the deteriorating situation in Eritrea and showing his interest in a military uprising. Idris stated that he advised await to show patience and thought then, things could be solved peacefully. Hamid Awate visited him again in Agordat after he his removal as Chairman of the Parliament. He again advised Awate to wait because starting a rebellion with few people. before preparations were made could be aborted.

In April 1959 he left to the Sudan accompanied by Ibrahim Sultan, the then Secretary General of the Muslim league, upon the request of the Eritrean Students Movement in Cairo, who wanted him to lead the independence movement. The students and Eritreans in the Sudanese army arranged his visit to Egypt where he was granted political refugee status. In Cairo, he joined forces with other Eritrean intellectuals and, in August 1960, announced the foundation of the Eritrean Liberation Front (ELF) with the main goal of liberating Eritrea by armed struggle.

As Chair and spokesperson of the ELF, Idris Mohammad Adam was particularly active in Western Eritrea where his constituency was mainly settled, among them he succeeded in recruiting Hamed Idris Awate – a brave national fighter – who led the first vanguard of fighters on 1 September 1961.

After the establishment of the ELF in Cairo in 1960, and before the launch of the armed struggle, the Chairman, Idris Mohammed Adem, carried an extensive diplomatic movement in the Arab countries to solicit support for the armed struggle. His first trip was to Saudi Arabia .There he met sabbe, Idris Mohammed Adem recalls that Sabbe had an organization called Al Urwa Al Wutqa (The Firm Bond) in Massawa, dedicated to the improvement of the Muslims living in Ethiopia and Eritrea. After having discussion with Sabbe, the latter agreed to work with the ELF. Together they proceeded to Somalia.

On the 20th December 1960, Idris Mohammed Adem submitted a memorandum which comprised of complaints from the Eritrean people against the Emperor of Ethiopia to the Prime Minister of the Republic of Somalia, Abdirashid Ali Shermarke. He submitted six important requests to the government of Somalia as summarized below. Idris Mohammed Adem, on behalf of the Eritrean people, pleaded with the concerned authority to allow as well as enable them:

1. To open an Eritrean political office in Mogadishu through which… [they] can exercise… [their] political activities and serve the demand of the Eritrean problem, such as organizing communications…
2. To adopt the complaint of the Eritrean people against the Ethiopian Government [in world’s conferences and the General Assembly of the U.N.]
3. To direct through Somalia’s broadcasting station… [their] addresses to [the Eritrean] people in Arabic and Tigrinya even in secrecy [so as to challenge Ethiopia’s propaganda and lift up the morale of the people]
4. To organize… efforts [of the Eritreans] with that of …the Somali people so that… [both of them] can face …[Ethiopia] as a united power when… [Eritreans] start active resistance (i.e. the use of force…).
5. To grant some of the Eritrean students… Somali passports to get advantage of the educational chances granted.
6. To admit some of Eritrean youth in Somali military force and build up an Eritrean division to be trained side by side with their Somali brothers so that they can be ready for the struggle in Eritrea at the proper time.

After a lapse of one month, Idris Mohammed Adem was granted the permission to open the first cover association in Somalia under the name Eritro-Somalia Friendship Association. Besides, the government of Somalia allowed Eritreans to hold Somali diplomatic passports for many years. With the rest of the requests, no credible source of information is available.

The Eritro-Somalia Friendship Association (ESFS) was set up on the 1st of February 1961. The association comprised of seven members with Idris Mohammed Adem and Osman Saleh Sabbe as Chairman and as Vice-chairman respectively. The main task of the society was to publicize the Eritrean cause all over the world by preparing and distributing memorandums and journals.
The diplomatic work in the 1960 did not end in Somalia. Having appointed Sabbe as Liaison Officer of the ELF in Somalia, Idris Mohammed Adem continued his visit to the countries of the Middle East, such as, Kuwait, Bahrain, Lebanon, and Syria. Although the first three countries, they claim, were found to be sympathetic to Eritrean problem, Syria officially announced over its media that it would give its full support to Eritrea and also agreed to provide military training in the Syrian soil.

Already in this early phase, ELF proclaimed its revolutionary program to liberate Eritrea through armed struggle, and addressed all Eritreans to unite in the struggle against the Ethiopian occupation. ELF political and military efforts were effective in attracting funds, weapons and political support from Arab states, and in gaining political support of freedom advocators in Europe and elsewhere.

On the field ELF, established a military zone division based on the Algerian Liberation Front (Algerian Front de Libération Nationale) (FLN). The five zones were meant to strengthen ELF military capacity but soon ethnic and religious problems emerged among the fighters. Already in this early phase, one of the most pressing problems faced by ELF was the creation of effective communication channels between the Cairo-based leadership and the fighters in the field. In order to solve this problem, the Supreme Council of the ELF decided, in 1963, to establish a military command (The Revolutionary Command) based in the border city of Kassala (Sudan). Idris Mohammad Adam was appointed as the Head of the Revolutionary Command and Oman Saleh Sabbe was appointed as first vice president.

His diplomatic missions was not confined to the Arab countries. In the mid 1965, Idris and osman Sabbe attended an international conference in China where they stayed for a month and met then with Mao Tse-Tung, the then Secretary General of the Chinese Communist Party and with Chou En-Lai, the first premeier of the Peoples' Republic of China. It was after this visit China decided to support the Eritrean Liberation Front with training.

In August 1969, at the Adobaha military conference inside Eritrea, ELF attempted a major restructuring. A Provisional Military General Command headed by Mohammad Ahmad Abdu substituted the Supreme Command. A new modification of the ELF organization took place at the ELF’s first National Conference held in the liberated bases in western in October 1970.  In that occasion a new political, military, and organizational programs were adopted. It centred on the sixteen member Revolutionary Council, the legislative arm of the ELF, and, in this case, Idris Mohammad Adam was elected chairman.

In May 1975, at the second National Conference of ELF held in the liberated bases, Idris Mohammad Adam decided not to be nominated to the new leadership of the ELF for personal reasons.

Idris Mohammad Adam moved to Jeddah – KSA afterwards to live among the important Eritrean local community. He didn’t play any active political role, but advocated unity and reconciliation among an increasingly divided ELF. During this period, Idris Mohammad Adam suffered from chronic kidney failure and lived on dialysis. In 1993 Idris Mohammad Adam voted in the referendum for the independence of Eritrea but never returned to his country. He passed away in Jedday City on thursday 28 August 2003 and was buried in Makkah in Saudi Arabia.
***************************** 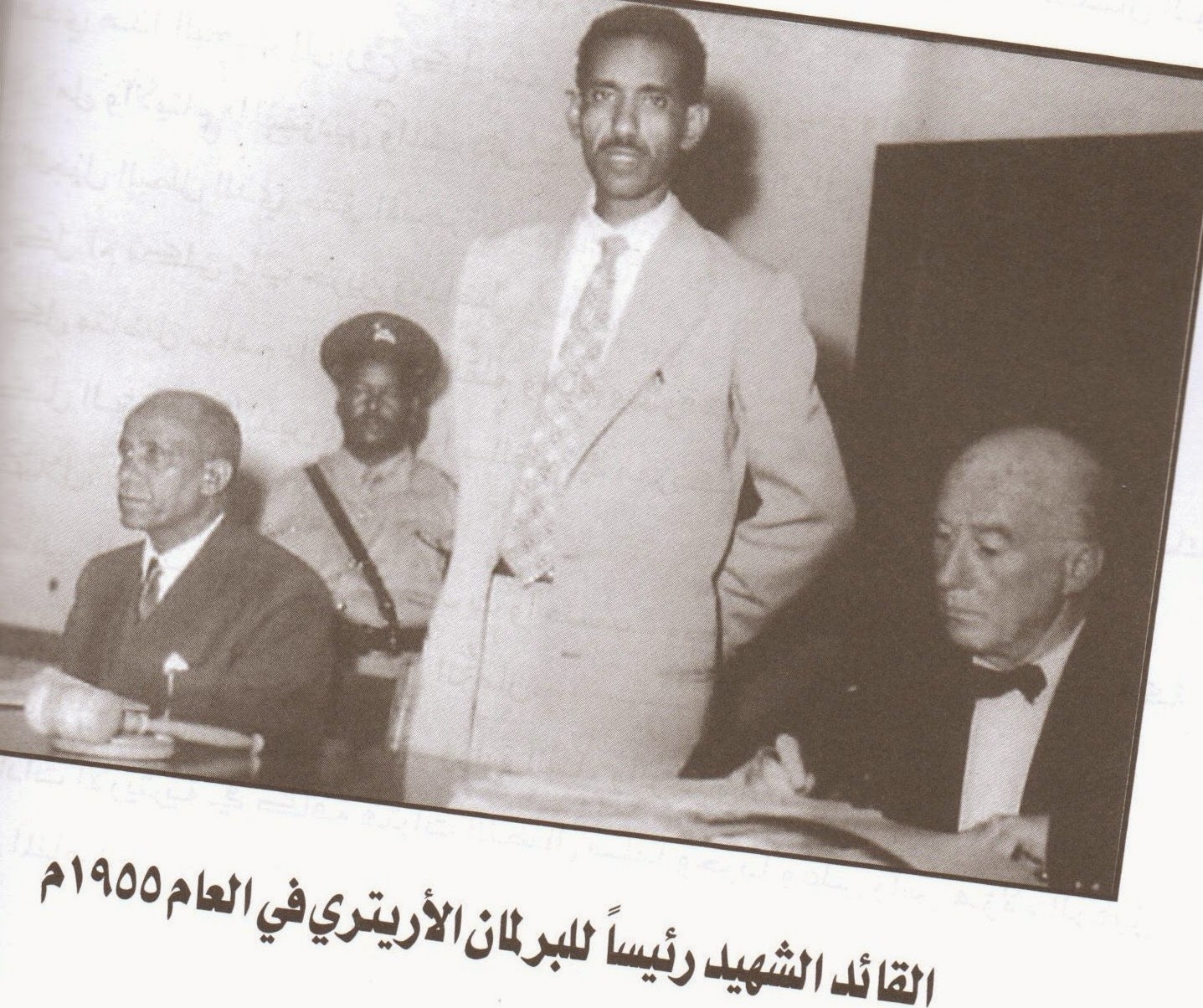 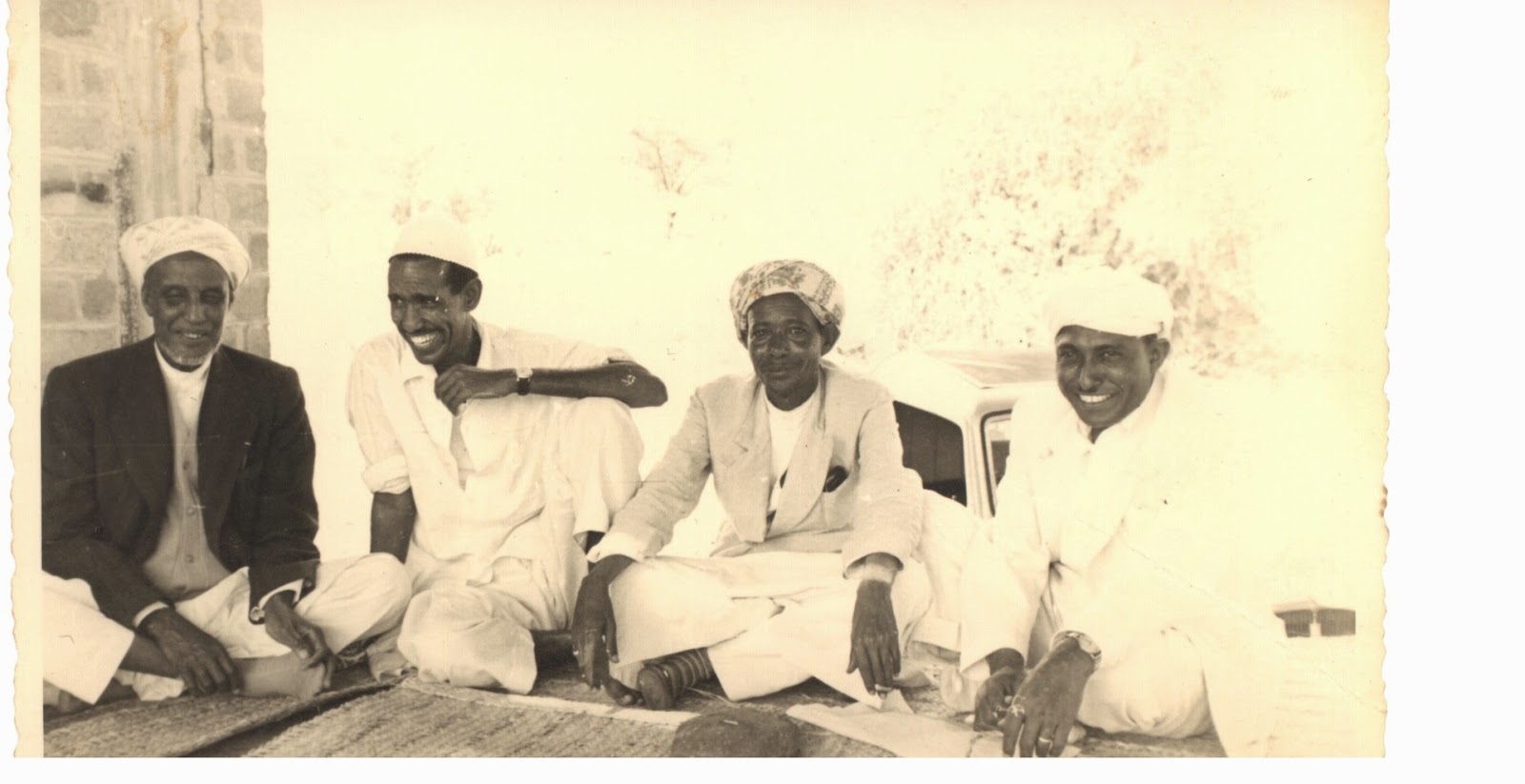